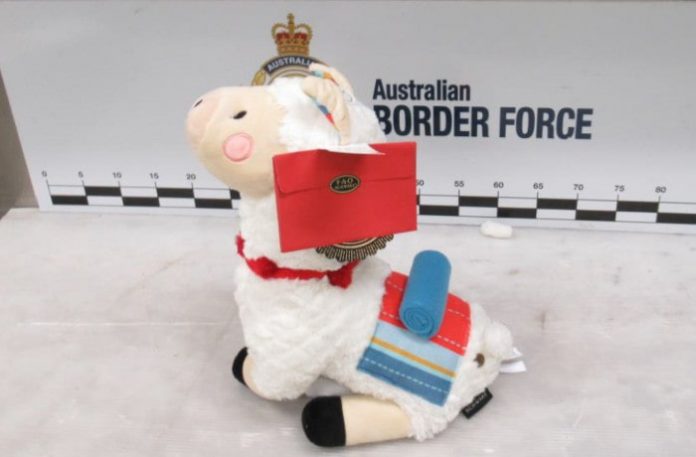 An Australian man was charged in the Perth Magistrate’s Court for attempting to import methamphetamine hidden in a children’s toy.

The old hide-your-meth-in-a-stuffed-llama trick might not be clever enough to get past the trained eye of an Australian law enforcement officer.

The 25-year-old man from Dianella, Western Australia, is accused of importing more than 270 grams of methamphetamine from the United States. Authorities said the methamphetamine was worth $276,000.

The investigation that led to the suspect’s arrest began on January 3, 2021, after the Australian Border Force (ABF) officers at the New South Wales mail facility intercepted a suspicious package. The package had been shipped from the United States and resembled a Christmas gift.

After opening the package, officers allegedly found a toy llama. Upon further inspection, officers found a white crystalline substance inside the toy llama. The white powder field-tested positive for methamphetamine.

“ABF officers are highly trained and equipped with state-of-the-art technology to protect the Australian community from threats like illegal drugs. Our officers are stationed at every international port across Australia, they are experts at intercepting illicit drugs no matter the size of the concealment or where criminals attempt to hide them, this detection is yet another example of their great work.”

The ABF handed over the case and the package to the Australian Federal Police (AFP) for further investigation. AFP officers replaced the methamphetamine with an inert substance before making a controlled delivery to the recipient’s residence on January 12.

After delivering the package, a man at the recipient’s address collected it and brought it into his home. AFP officers executed a search warrant at the suspect’s home. To their surprise, the recipient of the package had burnt the contents of the package in an outdoor fireplace. Officers still arrested the 25-year-old for attempting to possess a marketable quantity of methamphetamine.

German Man Bought 500 Grams of Drugs on the Darkweb