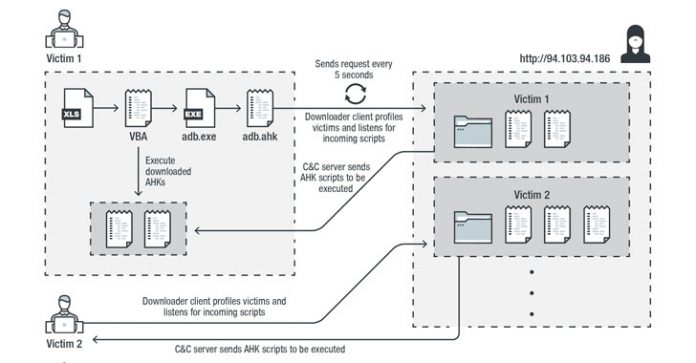 By: Ravie Lakshmanan
Threat actors have been discovered distributing a new credential stealer written in AutoHotkey (AHK) scripting language as part of an ongoing campaign that started early 2020.
Customers of financial institutions in the US and Canada are among the primary targets for credential exfiltration, with a specific focus on banks such as Scotiabank, Royal Bank of Canada, HSBC, Alterna Bank, Capital One, Manulife, and EQ Bank. Also included in the list is an Indian banking firm ICICI Bank.
AutoHotkey is an open-source custom scripting language for Microsoft Windows aimed at providing easy hotkeys for macro-creation and software automation that allows users to automate repetitive tasks in any Windows application.

The multi-stage infection chain commences with a malware-laced Excel file that’s embedded with a Visual Basic for Applications (VBA) AutoOpen macro, which is subsequently used to drop and execute the downloader client script (“adb.ahk”) via a legitimate portable AHK script compiler executable (“adb.exe”).

The downloader client script is also responsible for achieving persistence, profiling victims, and downloading and running additional AHK scripts from command-and-control (C&C) servers located in the US, the Netherlands, and Sweden.
What makes this malware different is that instead of receiving commands directly from the C&C server, it downloads and executes AHK scripts to accomplish different tasks.
“By doing this, the attacker can decide to upload a specific script to achieve customized tasks for each user or group of users,” Trend Micro researchers said in an analysis. “This also prevents the main components from being revealed publicly, specifically to other researchers or to sandboxes.”

Chief among them is a credential stealer that targets various browsers such as Google Chrome, Opera, Microsoft Edge, and more. Once installed, the stealer also attempts to download an SQLite module (“sqlite3.dll”) on the infected machine, using it to perform SQL queries against the SQLite databases within browsers’ app folders.
In the final step, the stealer collects and decrypts credentials from browsers and exfiltrates the information to the C&C server in plaintext via an HTTP POST request.
Noting that the malware components are “well organized at the code level,” the researchers suggest the inclusion of usage instructions (written in Russian) could imply a “hack-for-hire” group that’s behind the attack chain’s creation and is offering it to others as a service.
“By using a scripting language that lacks a built-in compiler within a victim’s operating system, loading malicious components to achieve various tasks separately, and changing the C&C server frequently, the attacker has been able to hide their intention from sandboxes,” the researchers concluded.