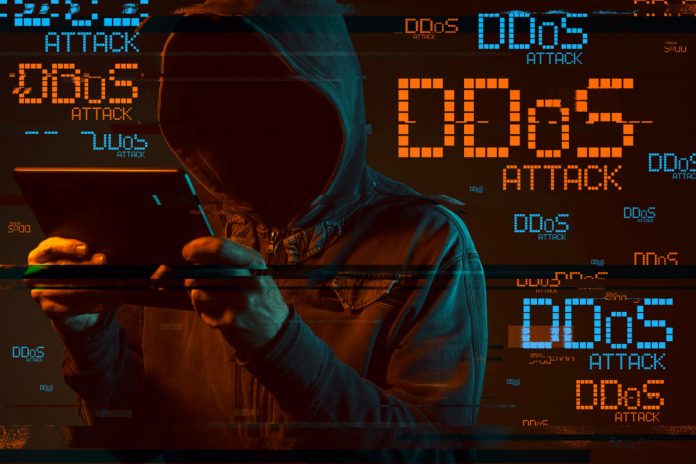 Following a massive cell phone service outage that affected hundreds of thousands T-Mobile, AT&T, Verizon, and Sprint customers on Monday, that hacktivist group Anonymous tweeted that it was a result of a “major DDoS attack.” Many other service providers such as Instagram, TWITCH, Fortnite and Facebook Messenger have also received downtime’s and outtages.

DDoS, which is short for Distributed Denial of Service Attack, is an attempt to make an online service unavailable by overwhelming it with traffic from multiple sources. They target a wide variety of important resources, from banks to news websites, flooding it with too much information to operate, and forcing a major challenge to customers or people wanting to publish or access important information.

Anonymous tweeted out a digital map that appeared to show the various types of attacks happening between America and the rest of the world on Monday.Anonymous@YourAnonCentral

The U.S. is currently under a major DDoS attack. https://digitalattackmap.com/#anim=1&color=0&country=ALL&list=0&time=18427&view=map …

Anonymous tweeted, “The source of the DDoS attack on the United States is currently unknown. We speculate it may be China as the situation between South and North Korea is currently deteriorating.”

MalwareTech, however, refuted Anonymous’ claims. They tweeted, “This site shows a random sample of global DDoS traffic badly plotted on a world map. It does not indicate an attack against the US, it lacks context to make any inferences at all (other than DDoS attacks are happening all day every day).

“Without knowing the exact destination(s), other than they’re within the US, no conclusions can be made,” MalwareTech tweeted. “The US is the world leader in hosting, this could be a bunch of unrelated DDoS attacks against random US-hosted websites. Maps like this are nothing but marketing eye candy.”

However a look at another live map from https://threats.a10networks.com/ shows huge amounts of DDoS threat actors originating from China and Russia. Also Vietnam as well as Ukraine.

No stream today due to what looks like a massive DDoS affecting Twitch. Cool, because what this quarantine/police state really needs is for the internet to go down.

T-Mobile appeared to be hit the hardest during the nationwide cell service outage on Monday. Down Detector received reports from over 1000,000 customers complaining of not being able to make phone calls and frustrated T-Mobile phone users shared their issues on Twitter.

The issues appeared to start around 2:45 p.m. ET, mainly affecting customers in southeastern states before spreading to other areas of the country. Customer complaints caused T-Mobile to become the No. 1 trending term on Twitter.

The outage affected customers’ ability to make or receive phone calls or text messages while using data. For customers looking to reach T-Mobile support online, they can contact the phone service company through their support website.

At 4:30 p.m. E.T., Neville Ray, President of Technology for T-Mobile addressed the outage. He tweeted, “Our engineers are working to resolve a voice and data issue that has been affecting customers around the country. We’re sorry for the inconvenience and hope to have this fixed shortly.”

It’s a catch-22 for customers wanting to report a cell service outage when they can’t call their mobile provider. While social sites such as Instagram and Facebook had reported issues, Twitter remained unaffected by Monday’s outage.Linda Sarsour✔@lsarsour

.@TMobile, are you gonna give a status or update on this national outage. Millions can’t make or receive calls.2393:23 PM – Jun 15, 2020Twitter Ads info and privacy109 people are talking about thisgoattfishh@goattfishh

One online user grew worried he might’ve missed his monthly payment. He tweeted, “T-Mobile got me out here thinking I missed a payment and I can’t even call to complain.”