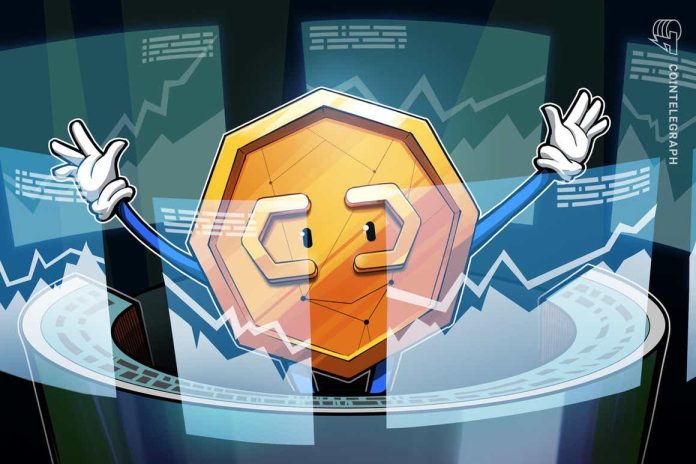 Unus Sed Leo (LEO) surged by almost 70% on Feb. 9 to reach its record highs as traders assessed the potential of an incoming supply crunch in its market.

The token was issued in 2016 to refinance crypto exchange Bitfinex after it lost about $70 million worth of Bitcoin (BTC) in a hacking incident. In its original whitepaper explaining LEO, Bitfinex had promised that if they could recover the lost funds, they would use 80% of the proceeds to buy back and burn LEO.

Around 80% of stolen Bitcoin recovered

On Feb. 8, the U.S. Department of Justice (DOJ) announced that last week it seized over $3.6 billion worth of Bitcoin — around 94,000 BTC — stolen from Bitfinex in 2016, valued as per the current bitcoin-to-dollar exchange rates. Overall, Bitfinex had lost 119,754 BTC to the hack, meaning the cryptocurrency tied to the incident was worth around $4.5 billion at the time of DOJ’s seizure.

Bitfinex confirmed its promise to use the recovered funds to buy back and burn LEO tokens in a statement issued Tuesday, noting that the process would be completed within 18 months of the date it receives the amount.

DOJ officials told the press that they plan to set up a court process for victims to reclaim their stolen Bitcoin funds.

Nonetheless, they did not disclose how long the process would take to finish. If the past is any indication, crypto refunds tied to exchange-related hacks take time. For instance, victims of Mt. Gox’s $460-million hack — from 2013 — are still waiting for their refunds.

But LEO bulls ignored such red flags and went ahead with raising their bids for the token on Feb. 8, anticipating that the upcoming supply crunch would make the token more valuable in the long run. As it happened, LEO’s price rose to its all-time high of $8.144, only to follow the upside move with a correction that saw the token going to as low as $7.04 early on Feb. 9.

Adam Cochran, a partner at activist venture capital firm Cinneamhain Ventures, identified problems with the ongoing LEO price rally, noting that not all the recovered funds would go through Bitfinex unless those holdings belong to the exchange themselves.

“There could, of course, be some weird deal structure in place, with the custom tokens Bitfinex issued, where they essentially claim they bought the loss off of other customers and so the Bitcoin is theirs and they can claim it all, and then later distribute,” the executive tweeted on Feb. 8, adding that he “personally” won’t be purchasing LEO while expecting a quick buyback from Bitfinex.

But if you are buying LEO for recovery plans, I’d dial down the % chance it happens that way, and maybe wait for impatient buyers who expect an instant recover to sell into stronger hands over coming months.

Conversely, Alexander Mamasidikov, co-founder of crypto wallet service, MinePlex, called the recovery of Bitfinex funds a “right fundamental” that could back LEO’s growth in the future.

“Native to Bitfinex, LEO has the chance of tagging along with the future ecosystem growth of the trading platform, a move that is billed to guarantee the coin’s continuous uptrend,” said, adding:

“LEO is arguably underpriced when compared to the native tokens of its major competitors. In the mid-term, LEO is poised to touch the $10 resistance point while a quarterly close of $12 is likely should this current growth pace be sustained.”

The views and opinions expressed here are solely those of the author and do not necessarily reflect the views of Cointelegraph.com. Every investment and trading move involves risk, you should conduct your own research when making a decision.

MEV bot earns $1M but loses everything to a hacker an...