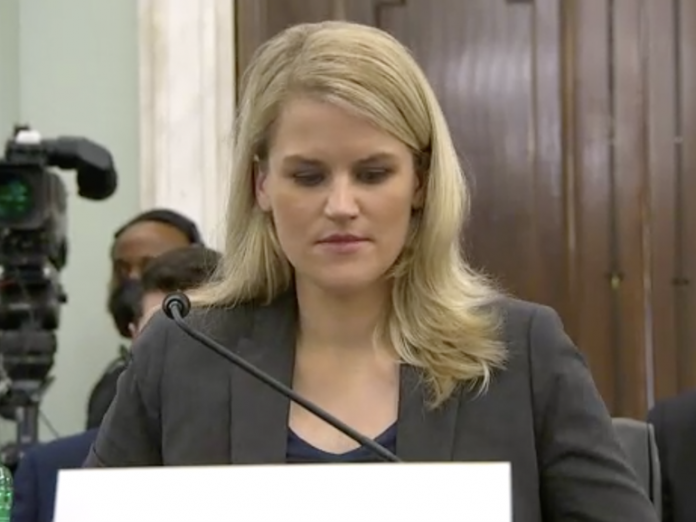 The whistleblower whose disclosures became a catalyst for a Senate inquiry into Facebook’s operations has declared the company as “morally bankrupt,” casting “the choices being made inside of Facebook” as “disastrous for our children, our privacy, and our democracy.”

On Tuesday, US Senator Richard Blumenthal chaired a hearing of the Subcommittee on Consumer Protection, Product Safety, and Data Security, with Facebook whistleblower Frances Haugen as a witness.

Blumenthal thanked the whistleblower for her “strength and courage in coming here today.”

Haugen, who used to work as the lead product manager for Facebook’s civic misinformation team, told the Senate that Facebook “intentionally hides vital information from the public, the US government, and governments around the world.”

The whistleblower also told the Senate members that Facebook “is choosing to grow at all costs” — which means that profits are being “bought with our safety.” This, in turn, is encouraging “more division, more harm, more lies, more threats, [and] more combat” online.

Antigone Davis, Facebook Director and Global Head of Safety, appeared at a hearing last week in which the Senate chastised the social media company for failing to do enough to protect younger users, and also accused Facebook of putting profit before safety by hiding the knowledge that the Instagram app causes mental harm.

The allegations stem from The Facebook Files, a series of investigations posted by The Wall Street Journal. The articles are based on internal files, draft presentations, research, and internal staff communication leaked by the whistleblower.

While the reports explore a variety of topics including Facebook algorithms that made users “angrier” and how the company allegedly does not apply the same terms of service rules to some high-profile users as the general public, the main thrust of the reports — branded a “bombshell” by Blumenthal — revolved around the ‘toxic’ nature of Facebook’s platform to teenagers, especially young girls.

The research in question explores areas including social comparisons, loneliness, anxiety, sadness, and eating issues. The WSJ reports suggest that some teenagers suffering from suicidal thoughts were able to trace them back to Instagram.

The WSJ published six of the internal documents which were the basis of its investigation. Facebook then published two of them, complete with annotations last week.

Facebook has accused the publication of deliberate mischaracterizations. Davis said, “We strongly disagree with how this reporting characterized our work, so we want to be clear about what that research shows, and what it does not show.”

Davis insisted that the internal research did not create “causal relationships between Instagram and real-world issues,” and while Instagram was indicated as a source that could make girls suffering from body image issues feel worse, this was one of the numerous topics included in the research — and many teenagers suffering from various problems have a positive experience on Instagram.

The latest hearing, titled “Protecting Kids Online: Testimony from a Facebook Whistleblower,” allowed the whistleblower’s testimony to be heard and for her experiences working at Facebook to be explored.

When queried about its use of algorithms and engagement-based rankings to promote specific types of content that could be harmful, Haugen said that “Facebook knows that its amplification algorithms can lead children from innocuous topics — such as healthy food recipes — to anorexia-promoting content over a short period of time.”

The whistleblower claims that Facebook has re-created experiments to test out amplification algorithms that could cause this transition from safe to dangerous topics — and so the company “knows” this happens.

Haugen added that Facebook CEO Mark Zuckerberg “has built an organization that is very metrics-driven — the metrics make the decision,” and, therefore, “the buck stops with him.”

Facebook has paused a plan to develop a version of Instagram for kids, citing the need for more time to work more closely with “parents, experts, policymakers and regulators.”

Haugen suggested that we could see the platform rolled out in a year, commenting:

“Facebook understands that if they want to continue to grow, they have to find new users. The way they’ll do that is to ensure kids establish habits before self-regulation.”

When asked if this is what she meant by “hooking kids?,” the whistleblower agreed.

The chair of the committee remained critical of Facebook, saying in today’s hearing that “their profit was more important than the pain that they caused.” Blumenthal also urged Zuckerberg to appear before the Senate.

Haugen called for the Senate to act, commenting:

“A company with such frightening influence over people […] needs real oversight. However, its closed design means there is no oversight.”

“Facebook can change but clearly will not do so on its own,” the whistleblower added. “Congress can change the rules Facebook plays by and can stop the harm Facebook is causing. […] We still have time to act, but we must act now.”

Davis said last week that Facebook would not “retaliate for them [the whistleblower] coming to the Senate,” however, this does not mean there will not be legal repercussions for sharing corporate documents with the WSJ. Blumenthal acknowledged that the whistleblower came forward at “great personal risk” and said the Senate will do “everything and anything we can to stop retaliation.”

On September 30, Senators Blumenthal and Edward Markey reintroduced a bill designed to bolster the privacy and security of minors inline. The Kids Internet Design and Safety (KIDS) Act, if accepted, is legislation that aims to prevent manipulative marketing, push alerts, ‘like’ and follower functionality, and features that reward those under 16 for spending more time on their devices.

In other Facebook news, the social media giant experienced a six-hour outage on Monday that also disrupted service for billions of users across Instagram and WhatsApp. Facebook believes the issue was caused by configuration changes that went awry.

“We want to make clear at this time we believe the root cause of this outage was a faulty configuration change,” the firm said. “We also have no evidence that user data was compromised as a result of this downtime.”

ZDNet has reached out to Facebook and we will update when we hear back.