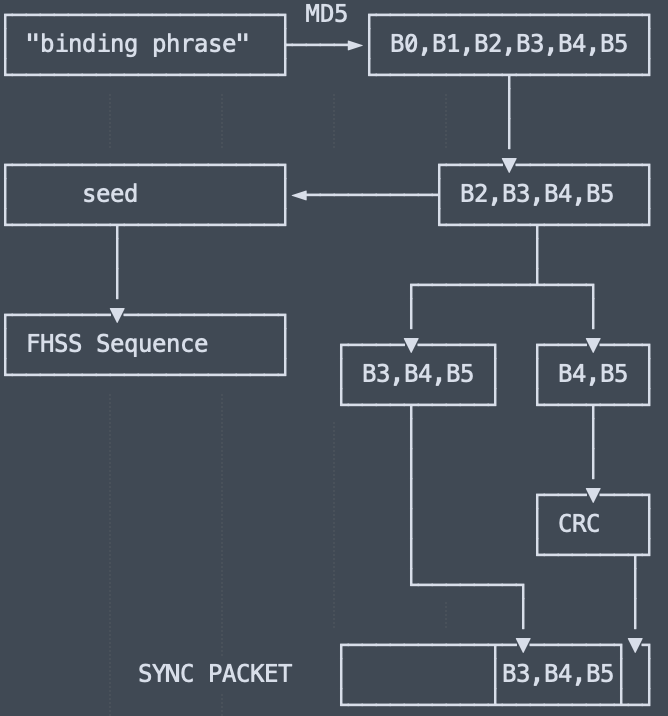 ExpressLRS is a high-performance open source radio control link. It aims to provide a low latency radio control link while also achieving maximum range. It runs on a wide variety of hardware in both 900 Mhz and 2.4 GHz frequencies. ExpressLRS is very popular in FPV drone racing and other remote control aircraft.

Using only a standard ExpressLRS compatible transmitter, it is possible to take control of any receiver after observing traffic from a corresponding transmitter.

ExpressLRS uses a ‘binding phrase’, built into the firmware at compile time to bind a transmitter to a receiver. ExpressLRS states that the binding phrase is not for security, it is anti-collision.

Due to weaknesses related to the binding phase, it is possible to extract part of the identifier shared between the receiver and transmitter. A combination of analysis and brute force can be utilised to determine the remaining portion of the identifier. Once the full identifier is discovered, it is then possible to use an attacker’s transmitter to control the craft containing the receiver with no knowledge of the binding phrase. This is possible entirely in software using standard ExpressLRS compatible hardware.

This attack could result in full control over the target craft. An aircraft already in the air would likely experience control issues causing a crash.

The binding phrase is passed through the MD5 cryptographic hash algorithm to obtain a unique byte sequence. Of this sequence, the first 6 bytes are stored as a shared UID between the receiver and the transmitter. The last four bytes of the UID are used as a seed to generate a random frequency hopping spread spectrum (FHSS) sequence. Both the transmitter and receiver hop between frequencies in the FHSS sequence in sync.

A ‘sync’ packet is sent from the transmitter to the receiver to at the start of a connection and at regular intervals through the FHSS sequence. CRC checks, initialised using the last two bytes of the UID are used to ensure that packets has been received intact.

The following diagram indicates the relationship between these elements.

Three weaknesses were identified, which allow for the discovery of the four bytes of the required UID to take control of the link.

Two of these issues relate to the contents of the sync packet.

The combination of these two issues means that only one byte is unknown from the UID used to generate the FHSS sequence. To find the last byte, all possible byte values were used to create 256 different possible FHSS sequences. The third weakness occurs in the FHSS sequence generation.

By choosing a frequency from the FHSS sequence, and observing the timings relative to a received sync packet, it is possible to determine which entries in the brute forced 128 FHSS sequences correlate with the final byte of the UID.

Once the final UID byte is discovered, the UID can be set in the transmitter and it will connect with the receiver.

It is acknowledged that the FHSS sequence can also be discovered by observing packets over the air without brute forcing the sequences, but that this can be more time consuming and error prone.

The security of the ExpressLRS can be improved with the following changes.