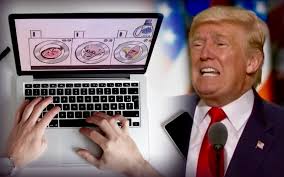 A hacker group that stole 756 gigabytes of data from one of the top US entertainment law firms doubled its ransom to $42 million and threatened to release “dirty laundry” on President Donald Trump if the money is not paid, Page Six reported on Thursday.

Its founder, the attorney Allen Grubman, was called “the most powerful attorney in the music business” by Vanity Fair in 2015.

The hacker group, called Revil and also known as Sodinokibi, originally asked for $21 million not to release the information.

On Thursday, the group doubled the ransom and threatened to leak damaging information on Trump, Page Six reported.

“The next person we’ll be publishing is Donald Trump. There’s an election going on, and we found a ton of dirty laundry,” the hackers said, according to Page Six.

They added: “Mr. Trump, if you want to stay president, poke a sharp stick at the guys, otherwise you may forget this ambition forever. And to you voters, we can let you know that after such a publication, you certainly don’t want to see him as president … The deadline is one week.

Switch and save. Plus, get Echo Dot and Amazon Smart Plug on us. With Unlimited. Restrictions apply.VISIT SITE

“Grubman, we will destroy your company down to the ground if we don’t see the money,” the hackers wrote.

Sources told Page Six that Trump had never been a client of the firm. Another source told the news outlet that Grubman was refusing to negotiate with the hackers.

“His view is, if he paid, the hackers might release the documents anyway,” the source said. “Plus the FBI has stated this hack is considered an act of international terrorism, and we don’t negotiate with terrorists.”

Grubman doesn’t appear to be a supporter of the president either. According to Federal Election Commission filings, in 2019 and 2020 he contributed to the presidential campaigns of Democratic Sens. Cory Booker and Kamala Harris.

The White House did not immediately respond to Business Insider’s request for comment on the hackers’ threats.

The law firm said in a statement to Page Six that “our elections, our government and our personal information are under escalating attacks by foreign cybercriminals,” adding that “law firms are not immune from this malicious activity.”

It added: “We have been informed by the experts and the FBI that negotiating with or paying ransom to terrorists is a violation of federal criminal law. Even when enormous ransoms have been paid, the criminals often leak the documents anyway.”

The same group in January targeted the UK-based currency-exchange company Travelex, which paid about $2.3 million in bitcoin to get its stolen files back, The Wall Street Journal reported.