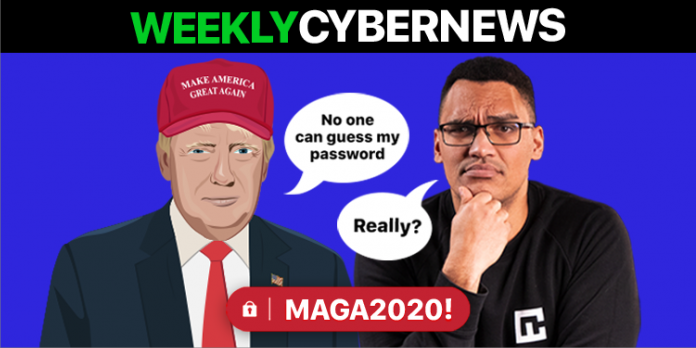 Let’s take a look back at the latest breaking news in cybersecurity and tech. This week, we’’re discussing Trump getting hacked (again and again), Zoom censoring a meeting on Zoom censorship, Taiwan’s cyberattacks and Dubai’s facial recognition push.

And now, Trump’s been hacked again. OK, this time it’s Trump’s campaign website, which had parts of the page taken over and replaced by a cryptocurrency scam.

Taking a page out of a dictator’s playbook, Zoom has shut down an event that was supposed to discuss Zoom censorship. Zoom had already, a week earlier, shut down a talk by a member of the Popular Front for the Liberation of Palestine, which is a designated terror organization. In response to that shutdown, a group of academics held a series of events in the US, Canada and the UK to discuss Zoom censorship, which Zoom then…censored.

On Monday, a US appeals court rejected a Department of Justice request that would allow the government to immediately ban Apple and Google from offering Wechat for download in their US app stores. The appeals court stated that the government had not demonstrated that it would “suffer an imminent, irreparable injury” during the appeal.

In a new report on CyberNews, research discovered that the Taiwanese government had been targeted by multiple cyberattacks in April 2020.  Ten key malware were discovered during these sophisticated targeted attacks — most of them were what’s known as the “Waterbear Loader” malware.

The city of Dubai is introducing facial recognition on its public transport systems in order to beef up security. This is set to roll out over the next few months. However, as we have discussed here many times – facial recognition promises more than it delivers, and it usually delivers a privacy violation.

US Agencies and FireEye Were Hacked Using SolarWinds Software Backdoor