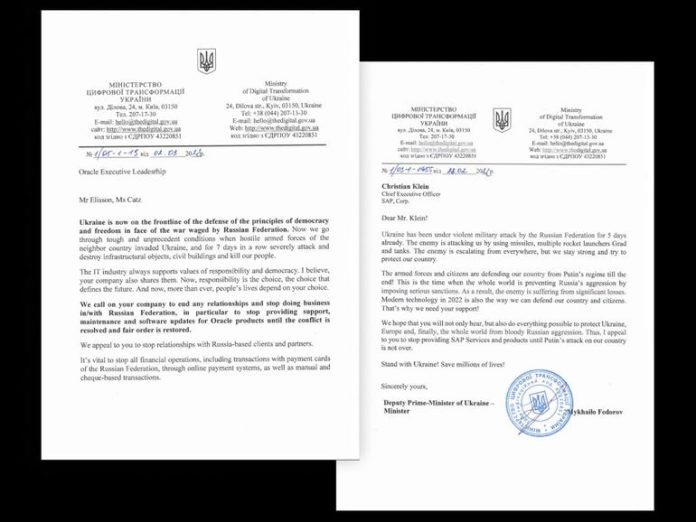 Ukraine’s government has called on Oracle and SAP to end business relationships with entities tied to Russia immediately.

The letters are similar in their appeals, and both request an end to business relationships in Russia in response to the current invasion of Ukraine by the country.

In the letter sent to Oracle’s leadership, Fedorov said, “Ukraine is now on the frontline of the defense of the principles of democracy and freedom in the face of the war waged by [the] Russian Federation.”

“The IT industry always supports values of responsibility and democracy. I believe your country shares them.”

The Ukrainian leader went on to say that Ukraine “calls on your company to end any relationships and stop doing business in/with [the] Russian Federation, in particular, to stop providing support, maintenance, and software updates for Oracle products until the conflict is resolved and fair order is restored.”

In communication with SAP, Fedorov said that “modern technology in 2022 is also the way we can defend our country and citizens, and that’s why we need your support.”

“We hope that you will not only hear, but also do everything possible to protect Ukraine, Europe, and finally, the whole world from bloody Russian aggression. […] Thus, I appeal to you to stop providing SAP services and products until Putin’s attack on our country [is] over.”

“On behalf of Oracle’s 150,000 employees around the world and in support of both the elected government of Ukraine and for the people of Ukraine, Oracle Corporation has already suspended all operations in the Russian Federation.”

Fedorov responded, “With gratitude from all the free people of Ukraine!”

The official also published an open letter to game developers on March 2, requesting a temporary block on all Russian and Belarusian account holders, including a temporary ban on their participation in international e-sports events.

In related news, on Tuesday, Apple said product sales have been paused in Russia, exports to sales channels have been stopped, and the Russian state-controlled RT News and Sputnik News outlet apps have been revoked from the App Store outside of the country. In addition, the iPad and iPhone maker said it “has disabled both traffic and live incidents in Apple Maps in Ukraine as a safety and precautionary measure for Ukrainian citizens.”

Ukraine has also asked for Russia’s top-level domains (TLD) to be revoked, alongside their SSL certificates.

ZDNet has reached out to Oracle and SAP, and we will update when we hear back.

Ransomware: This new free tool lets you test if your cybersecurity...